When we started Redbird in 2006 we knew that the airlines and the military had been using full-motion simulation for years and we thought we could build a motion system that normal flight schools could afford. The Redbird motion system is unlike any other system on the market. This one-of-a-kind system provides effective motion feedback for yaw, pitch, and roll. The system is clean and quiet enough to operate in a small classroom, but robust enough to stand-up to years of hard use in a large professional pilot academy. 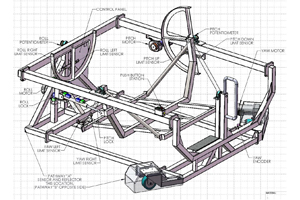 We’ve come a long way since our first design, but the goals for our motion system haven’t changed:

This unique system achieves these goals by balancing the entire cockpit load so that the center of gravity is close to the pitch and roll axis. The FMX motion platform does not rely on a platform suspended by linear actuator legs. Instead, the actuation mechanism is rotational via motors and belts. All of our motion systems are comprised of several linked sub-systems, including:

We know from firsthand experience at our flight training laboratory, Skyport, that motion does matter, and for some less than obvious reasons. Pilots that learn primary flight skills in a device that provides accurate motion feedback transition to the real aircraft in less time because they know what it “feels like” to fly. They are less anxious in the cockpit, have better touch on the controls, and know why you need right rudder in the climb. Interestingly, having a full motion simulator might be even more important for the flight school. At the end of the day, a flight school is a business that lives or dies by how many new customers it can acquire and how many current customers it can keep. The FMX has proven to be a huge marketing and customer retention advantage for the hundreds of schools that operate one. Motion: Good for Training, Good for Business.

How it Works in Painful Detail

The computation for the movement of the motion system is done in parallel to the aerodynamic modeling of the simulation. The calculations are based on the acceleration and rotation of the simulated aircraft in all six degrees of freedom. The calculations are preformed every 6 milliseconds and the updated position for each axis is transmitted to the platform after each calculation. The system is linked to the flight simulation computer with a high-speed connection and the commands are issued by the motion system command software and received by the motion system control logic computer using a handshake protocol. After the control logic computer has received the command, it issues drive commands to each motor drive to move the platform to the new position. The drive for each respective motor sends a signal to the motor and the control logic computer monitors the position of each axis for any deviations from the issued position command. If the system detects a fault, it automatically engages the hydraulic safety locks and displays a fault code.

Inside the February 2023 Redbird Pro Scenarios

Avemco Customers Save With Redbird Pro